Home > About Us>Blog> A colourful read: Celebrate Pride Month with our picture book Guthli Has Wings

A colourful read: Celebrate Pride Month with our picture book Guthli Has Wings

Guthli is everyone’s favourite – a happy child who likes to draw fairies, swing and cycle. But then one day she is told not to wear her sister’s frilly frock that she loves, but her ‘own’ boy’s clothes. And things erupt...

“Why do you keep saying I’m a boy when I’m a girl?” Guthli asks her mother.

This June, in celebration of Pride Month, we recommend Tulika's picture book, Guthli Has Wings by Kanak Shashi – a compelling story about gender identity. Framed by vibrant cut-out illustrations, it explores, simply but boldly, the confusion and acceptance that Guthli and her loving family go through.  We spoke to the author-illustrator Kanak Shashi about her book, the process and the challenges that she faced while writing.

What prompted you to write Guthli?

I have always been interested in gender. In how the world seems too neatly divided into two genders almost like a black and white strip, where grey spaces are taken into account reluctantly, if at all, while violently ‘othered’ most of the time. I have been exploring these themes for a long time. One thing that has always drawn my attention particularly is the performative aspect of gender the way we are, and our whole existence is, gendered. And that is not only about the ‘choice’ of clothes. It’s a long, long list of dos and don’ts of acceptable roles.

So, when I was working for  FICA (The Foundation for Indian Contemporary Art) on a magazine project with a group of children in Delhi, I observed that sometimes they used to tease each other “Ye ladki ke jaise mehndi lagake aaya hai... ye ladkon ki tarah football khelti hai..." (He’s come wearing mehendi like a girl… She’s playing football like a boy…) etc. So we discussed what they understood about gender, what the differences were between boys and girls, and we did a fun activity where we changed gender roles. Some of them were shy, but most of them copied all the available stereotypes. The point is that those children actually enacted the performance of gender, and in that way also thought about the whole process.

This exercise was a learning experience for me. And it gave me the idea for another Guthli story. Guthli was not a new character at that time. I had already written a couple of stories with Guthli as a girl. But that activity with children added a new dimension it opened up for me the possibilities to explore the fluidity of gender through this character. 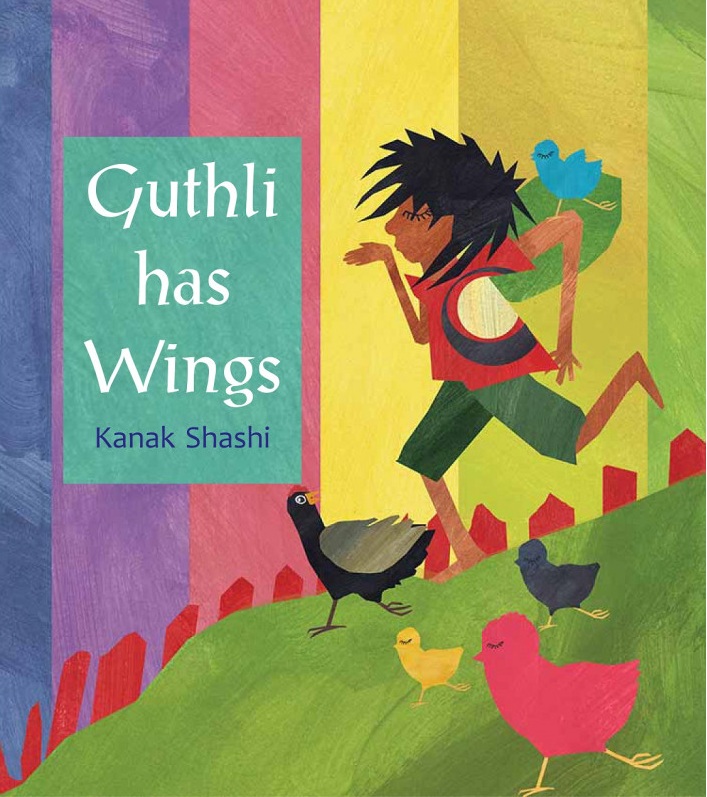 This book can be a starter to introduce delicate topics like diversity, acceptance,
gender identities and preferred pronouns to the children in your life.

When was the story first published?

I had written Guthli To Pari Hai in Hindi in 2010, which my friend and author Rinchin translated into English as Guthli Has Wings, and this was suggested as a story for the anthology Being Boys. Recently, Bhopal-based NGO Muskaan published it as part of their English reader set. And now this picture book!

Why did you decide to write a picture book addressing very young children in the 5 to 7 age group? Some might say they are too young to understand issues of gender identity.

As seen in the children’s activity I just spoke about, I think the sooner you start talking to children the better it is. I have seen children aged 3–6 years trying on each other’s clothes – girls wearing boys’ clothes and vice-versa. Boys speak like girls (main nahi jaoongi-aaoongi) and girls like boys (khaoonga-pioonga). This is all before the standard gender roles are firmly cemented in their minds. For them it’s a fun thing, they can be anything they want... a girl, a boy, or something entirely different.

Children are intelligent beings incessantly exploring the world around them and getting amazed by it. Biases and prejudices are not in their nature they learn these at a very young stage from us, the adult world. The point is that we are teaching these to them from a very, very early stage. Now, if we want to cultivate a different sensibility about gender, the time to start that too is at a much younger stage than we usually concede.

What were the challenges in writing a picture book on a theme that is seen widely as a ‘taboo’ in children's books?

There was nothing especially challenging about writing the book! Of course, every work is challenging, as in you try to explore new ways and perspectives of seeing, creating and experiencing things. In that way, given the ‘taboo’, that is, talking about gender, the challenge is now for the readers, teachers, parents, etc. Somehow, I have a feeling that it won’t be as confusing for the children as it might be for the adults.

Have you interacted with this age group using the story?

Not with this story in particular, but I have interacted with children on these themes.

Would you agree that such books are needed to sensitise adults more than children as it is their attitudes that influence children the most?

Lots of material is already available for adults, but do they read it? Maybe they don’t feel the need to read, and even if they do, how many of them talk about gender with their children? I think discussions and asking questions are important, and children are better at that. What parents need to do is to be honest if they don’t know the answers to the questions raised by children. Then they should find out about them, rather than brushing aside the children’s questions.

You have also illustrated the book. How did you arrive at this particular style?

In art practice, you always try to experiment and explore things. That is the fun of doing art. And since I was also the writer in this case, it gave me more freedom to play around with the medium.

Take this Pride Month to celebrate diversity, acceptance, kindness and love with young children.
Get your copy of Guthli Has Wings from our website today!