Home > About Us>Blog> World Environment Day special! Q&A with Pow Aim Hailowng author of Why The Elephant Has Tiny Eyes

World Environment Day special!
Q & A with Pow Aim Hailowng author of Why The Elephant Has Tiny Eyes

The first chaang, the first elephant, once had big eyes,
Which the animals thought looked beautiful and wise.

Then along comes a little wagtail and changes the chaang forever! So goes this hilarious folktale told by the Tai Phake, a lesser-known community from India’s northeast to which the author, Pow Aim Hailowng, belongs. Here’s what she has to say about the book (illustrated by the inimitable Priya Kuriyan), and why she wrote it. Don't forget to watch the reading on our website! 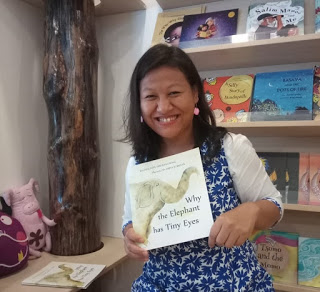 What was the inspiration to retell this folktale?

I relate the Tai Phake folktales to my mother narrating them as she prepared food or did other work, then to my father starting to tell them in the midst of a normal conversation, and one of the tales, in fact, to my grandfather who narrated it as we sat soaking in the winter sun. Years later, I realised that most of these tales were a lot of ‘why’s’. Like Why the Elephant has Tiny Eyes, ‘why does the cock crow when the sun rises?’, ‘why does the cuckoo lay her eggs in a crow’s nest?’, ‘why do some monkeys have red bottoms?’ and so on. They were all adorable and funny. I thought it would be nice to share these stories with other kids. As an adult, I thought the Tai Phake was among the lesser known tribes. Stories would be a good way to start introducing children to these tribes and about the existence of other ways of life.

Why did you choose verse over prose for this story?

As kids, we had to remember poems by heart to write them during exams. I always found it easy to remember poems that employed a rhyme scheme. For example, R. L. Stevenson’s poems, Travel – ‘I would like to rise and go, where the golden apples grow’, and The Vagabond– ‘Give to me the life I love, Let the lave go by me, Give the jolly heaven above, And the byway nigh me’, are still etched in my memory. Primarily because they rhymed and had a singsong wave to their rhythm. Of course, I understood their deeper meanings only years later. So when I tried to recall what I loved as a kid, and how easy it was to grasp something in verse form, I realized that kids would enjoy verse more. But, I also had a lot of fun rhyming the words. 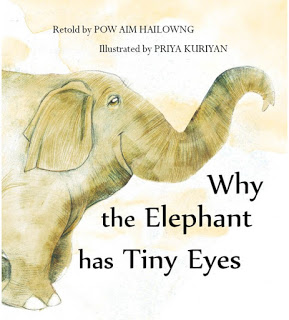 How was the experience of telling this story to children? How did they respond to it?

At all those times when I told the story, children were curious to learn. Why the Elephant has Tiny Eyes has a wagtail bird, not usually found or seen in most places in India. So, the children want to know more about how they really look or where they can be found. The book, which has some Tai Phake words, also introduces them to a new language and they have been excited to learn them. But, children are also honest. If they are bored, they will tell you outright. So, writing a book for children and reciting it to them are two very different things. I am not sure if I will ever be prepared for their multiple reactions! I have a lot to learn. 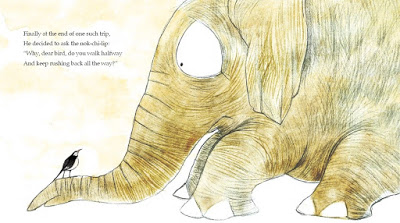 When you are not writing stories, what are you usually doing?

I am a doctoral student. So when I am not writing, I am researching to write some more! The only difference is the kind of ‘stories’ I write! Apart from this, I also watch a lot of movies- Marvel series, the clichéd rom-coms, drama and so on.

Who are your favourite children’s authors?

Uncle Pai. He was the editor of the Tinkle magazine. Since he introduced a lot of the 90s kids to reading, I would count him as one of my favourite writers. I received a lovely handwritten letter from him when I was nine or ten years old. It was a rejection for a story I had contributed, but it was inspirational as it spoke to the mind of a nine or ten-year-old about never giving up. I still love reading the old Tinkle comics. Apart from him, my favourite authors would be Enid Blyton and Ruskin Bond.

What other stories would you like to see come alive as books?

The human imagination is limitless. The Harry Potter series is an example of what can be created – a whole new world. But I do feel that no matter what stories come out, there is also the need to talk about the accessibility of those books to every kid. If my book cannot be read by someone who is visually challenged, it means they will not be able to enjoy the same laughter as other kids. When a book is too expensive, it means the story might not reach every kid. Well, these issues keep popping in my mind. But like I said, the human imagination is limitless.

What books are you working on now?

There are more Tai Phake folktales that I would love to share with the world.

Don't miss the reading of this charming story on our website and click here to get your copy today!